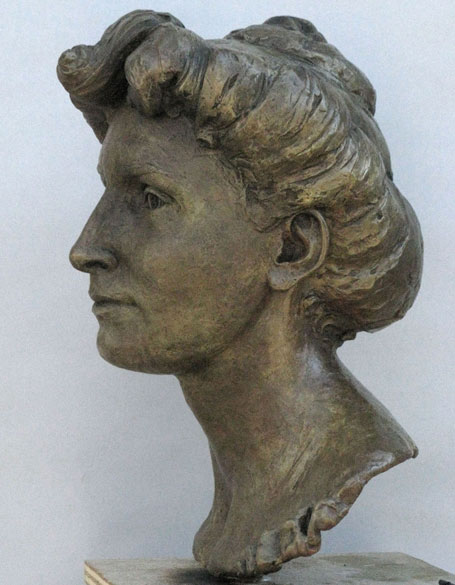 The Central West End Association of the city of St. Louis, Missouri (USA), dedicated a bust of Kate Chopin at the Writers’ Corner in the city. The dedication took place on Sunday, March 11, 2012.

Sculptor Jaye Gregory talked with us about her bust of Kate Chopin. We asked her several questions:

How were you selected to do the bust?

The West End Association is responsible for creating the “writer’s corner” at the intersection of Euclid & McPherson in St. Louis. A bust of Tennessee Williams and one of T. S. Eliot have already been installed. I was invited to the unveiling of the T. S. Eliot bust by the sculptor, Vladimir Zhitomirsky, who suggested at the time that I do a bust of Kate, the association’s next project. His thinking was that they weren’t going to commission a sculpture until they had financing but that if they were offered an acceptable piece, they’d find financing for it. So I wasn’t selected so much as the portrait was.

What limits were placed on you–limits on size or materials, for example?

I assumed it would be cast in bronze, just as the first two were, and that they wanted a reasonably natural (not terribly abstract) portrait, but I didn’t think of those as limitations so much as something that I’d really like to do.

Were you able to choose Chopin’s age as you would present her in the bust or were you commissioned to present her as she looked at a specific age? Do you think of your bust as picturing Chopin at a given age?

The choice was mine and was based on the limited photographs available. I think of her as being in her late 40s, early 50s.

What had you known about Kate Chopin before you were commissioned to do the bust? Had you read any of her work?

I’d read The Awakening and a few of her stories many years ago, and was aware of some controversy when The Awakening was published, but I knew almost nothing about her.

What sort of preparation did you make before beginning your work? Did you read more of Chopin’s works? If so, which works?

The first thing I did was start a search for photographs. As it turned out, the ones I initially found on line were the best I was able to locate, even with my archivist husband’s help and connections. I read a book about her that was highly recommended and then her “complete” works, including stories that were never intended for publication.

What did you think of Chopin’s fiction? What impressions did her work give you? Did you seek to capture any of those impressions in the bust?

I enjoyed reading her works immensely and was impressed with both her story telling and her attention to her writing. I think her skill was most obvious in reading the stories that she felt to be unworthy of or not yet ready for publication. After reading those I became much more aware of how carefully crafted and beautifully written her published pieces were. Reading her works gives one an impression of a woman of tremendous compassion, a strong sense of irony, and a great sense of humor; reading about her life and the era in which she wrote, one realizes that there must also have been a great strength of character. And, of course, I wanted all that in the bust!

Which photo of Kate Chopin was most influential for you? Why?

I did study the photographs, and I think I was looking for evidence of the qualities I’d found in her writings as much as for her physical appearance. The most helpful in that respect was an almost 3/4 view with her hair pulled up and back and just a hint of a smile.

We notice that you say on your website that “my primary interest is in the female figure–as she is, rather than idealized, and introspective, rather than dynamic.” Does that describe what you sought to capture in your Kate Chopin bust?

Tough question. I pretty much discarded any negative information from her biography as basically unsubstantiated and, at least in some sense, trying to use Kate’s writing to justify that writer’s own agenda. I know nothing of her personal flaws, vanities, or weaknesses, leaving me with my own (certainly) idealized version of who she was. I’m sure that she did want her writing to be remembered and that she wouldn’t object to being remembered through that writing. So I guess I fudged on the “as she is” part and used an “as I think she would have liked to be known.”

What do you wish people who look at the bust would take away with them? Do you wish they would sense some specific aspect of Chopin’s life or work?

A sense of beauty, strength of character, compassion, maybe even a little curiosity about her work. . . . 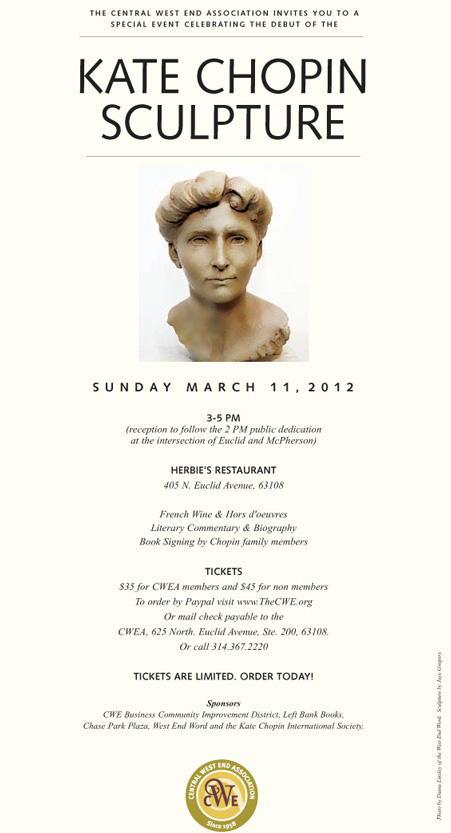