Kate Chopin’s stories and novels have inspired artists working in all sorts of media. Scroll down for information about films, dance and theatre productions, operas, a graphic short story. . . . You can contact us for more information.

IMDb.com, the Internet Movie Database, includes a filmography of works based on Kate Chopin’s fiction. The listing includes at least nine films–long and short–made between 1956 and 2014.

A New Stage Adaptation of The Awakening in San Francisco

The Breadbox, a theater in residence at the Exit Theatre in San Francisco, California, USA, is offering a world-premiere stage adaptation of Kate Chopin’s The Awakening. Written by Oren Stevens and developed with director Ariel Craft, it began a three-week run at the Exit on July 29, 2016.

You can read a review of the production by Lily Janiak, the San Francisco Chronicle’s theater critic, and one by Richard Dodds in the Bay Area Reporter.

An Awakening Program in Tennessee 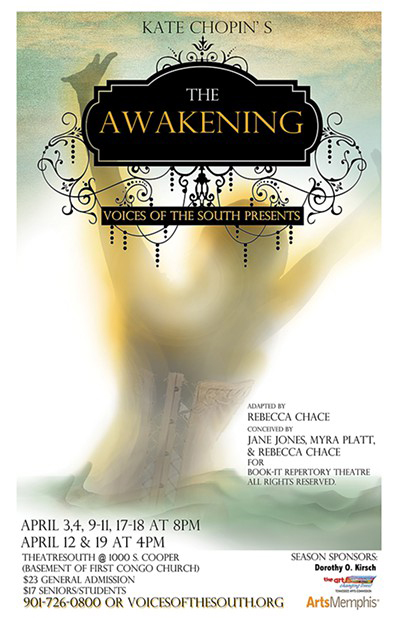 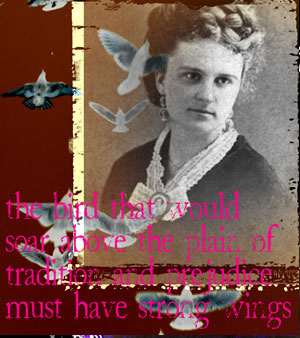 A New Film Based on “Her Letters” 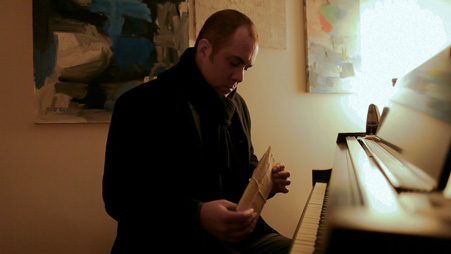 The executive producer of the film, Karla S. Bryant, tells us:

“I leave this package to the care of my husband. With perfect faith in his loyalty and his love, I ask him to destroy it unopened.

“These two lines, written over a century ago by Kate Chopin, were the catalyst for Amanda Lin Costa’s vision for a short film. Remaining faithful to the story, the contemporary setting emphasizes the timeless qualities of the themes of love, doubt, suspicion, and despair. In keeping with Kate Chopin’s astute eye for subtle detail, the film is rich in visuals and moments which capture a multitude of emotions.” 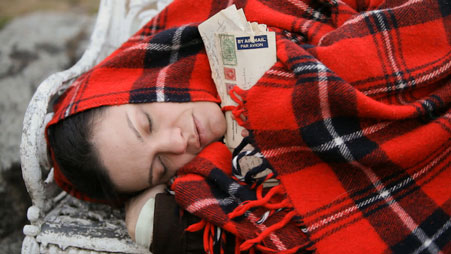 “Once the post-production work is finished on the film,” Ms. Bryant adds, “our plan is to enter it in several quality film festivals and explore future distribution venues. A percentage of funds raised will support New York Women in Film and Television. We believe this is a strong project which highlights the uncompromising creativity of Kate Chopin, presented as a film to a wider audience.”

We will update this announcement when the film is released. Our thanks to Karla Bryant for the film stills.

Films Based on The Awakening

In 1991, Mary Lambert directed the made-for-cable version of The Awakening, called Grand Isle, with Kelly McGillis playing Edna Pontellier. The film is available on VHS, but not, apparently, on DVD: 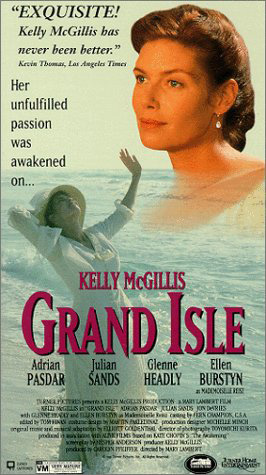 Also, earlier, in 1982, director Bob Graham did a feature-length version of the novel called The End of August. It’s apparently no longer easily available, but you may be able to find a VHS copy: 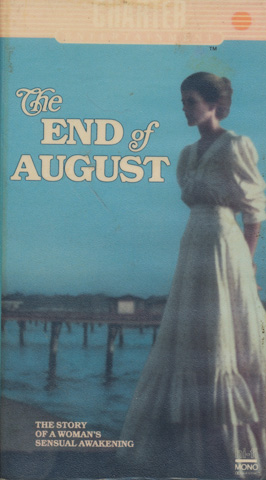 There is, in addition, what many critics consider a fine novel by Robert Stone called Children of Light, about a production company making a film of The Awakening using a performer struggling with some of the same issues that Edna struggles with. 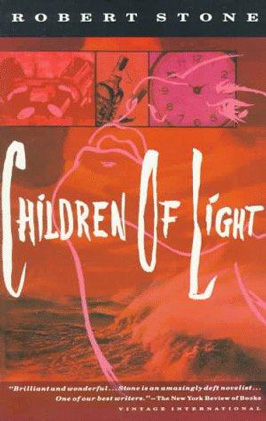 Reading of a New Screenplay Based on The Awakening

New York area residents and visitors attended a reading of a new screenplay based on Kate Chopin’s The Awakening. The screenplay was written by Jim Sherry, the production directed by Joyce Wu. 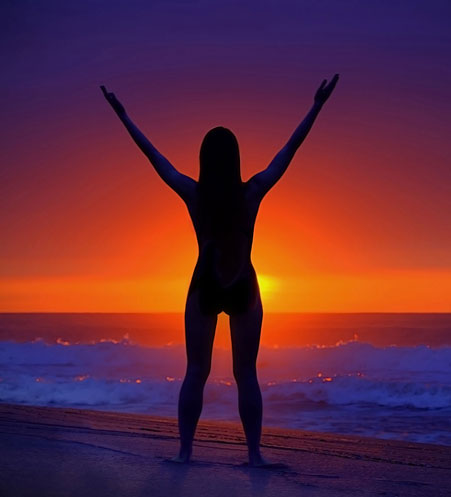 James Stepleton’s The Awakening (after Kate Chopin’s novel) was featured on New York City Opera’s VOX 2012 Contemporary American Opera Lab on November 8, 2012. The reading featured NYCO soloists and orchestra in the opera’s final scene. City Opera’s new opera reading program is the most prestigious in the country. It’s extremely rare for them to give a second reading of the same work. After 35 years Stepleton’s The Awakening is finally finished. The reading was a big step towards a full production.

The June 13, 2010, episode of Treme, an American television drama series set in New Orleans a few months after the 2005 hurricane, is built around a reference to Kate Chopin’s The Awakening. 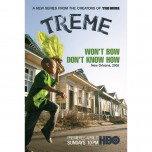 The episode is focused on a character named Creighton Bernette, a university professor. Treme was created by David Simon and Eric Overmyer and runs for ten episodes on HBO. The word Treme is pronounced tre-MAY. It’s the name of a neighborhood next to the French Quarter.

The episode is available on DVD.

Los Angeles Dance Company’s Production Based on The Awakening

The Vaughn Dance Company in Los Angeles premiered on November 7, 2008, an original modern dance production, Reaching Out for the Unlimited, based on Kate Chopin’s novel The Awakening. It featured the music of Grammy-winning composer/guitarist Andrew York.

According to the announcement, “Vaughn Dance Company’s adaptation of The Awakening traces the heroine’s emotional journey, exploring her relationships with friends, lovers, and the sea. Andrew York’s music brings alive the emotional arc of this story with a score that includes new, unpublished pieces and a live performance by York. Making its mark with sensual shapes and undulating movement, Jennifer Vaughn’s choreography is a palpable embodiment of music that captivates broader audiences and dance aficionados alike.”

Jennifer Vaughn told us in an email message that her production “traces Edna’s emotional journey, focusing on her complex relationships—with friends, lovers, and with the sea. The company’s ten members embody these roles, including different ‘Ednas’ who change as she discovers new parts of herself. The dancers also become the beckoning sea, the entity which both cradles and emboldens Edna but also sweeps her away.”

She continued, “I chose very simple staging and costuming—very plain and timeless. And for logistical reasons, we chose not to address Edna’s relationship with her children. I believe that audience members who know the story will recognize much of it, but I’ve tried to design the production in such a way that those who do not know the story will still be able to get something out of it.”

A new production of The Awakening was presented by Savage Umbrella and 3AM Productions at Gremlin Theatre in St. Paul, Minnesota, from April 2 to 17, 2010. The script is by Laura Leffler-McCabe, who also directed. The production includes music composed by Candy Bilyk and performed by a trio of instrumentalists, with singing by the cast. 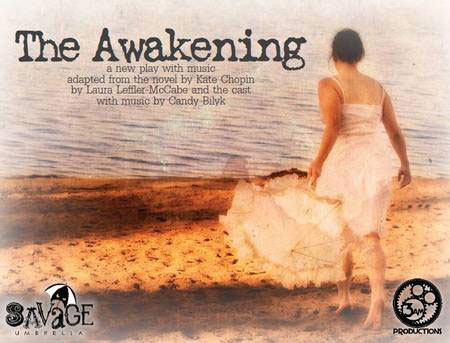 From the announcement for the production:

“‘The book is beautiful,’ Leffler-McCabe says when asked why she decided to take on the project as writer and director. ‘It’s this proto-modernist text full of slice-of-life details and conversations, along with these really lyrical expressive passages of a character in turmoil.’

“The show, which boasts a cast of more than a dozen, was company-created, and incorporates music and movement to do justice to a story that begins in a woman’s heart, then radiates with seismic repercussions into the world around her.

“‘We started workshopping with the cast back in September,’ says Leffler-McCabe. ‘We cussed a lot, fought some, danced, experimented, and honed in on something that gets to the heart of what Chopin was trying to do.'”

You can read a review from a local paper. 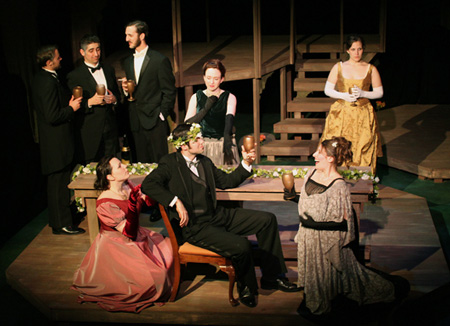 Laura Leffler-McCabe also sent us a performance excerpt. “We put this together for a grant we’re applying for,” she says, “so it’s short and of a sort of strange moment, but it hopefully gives an idea of the style of the production.”

A Graphic Short Story Based on “The Story of an Hour”

Here is the first page of a story called “One Afternoon”: 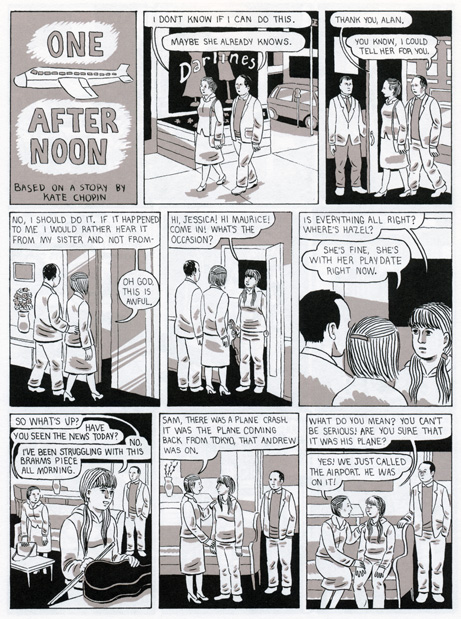 The New York Times says Cecil and Jordan in New York “is narrated by a young woman who’s just moved to the city with her filmmaker boyfriend; it’s a clear-cut tale of impecunious 20-something artists until halfway through, when the narrator abruptly transforms herself into a chair (click on “Look Inside” the book) gets taken home by someone who finds her on the sidewalk and decides that her old life won’t miss her. The engine of these mercilessly observed stories is squirminess: emotional awkwardness so intense that it can erupt into magic or just knot itself into scars.”

AlterEgo Productions of Lake Charles, Louisiana, offered playwright Carolyn Woosley’s cycle of one-woman plays about women of Louisiana in ten cities throughout the state in 2010. The “Visionaries” Company, performing three of Woosley’s plays, began its tour in September 2010. Woosley’s “Louisiana Women” is a cycle of a dozen one-woman plays that focus on the lives of women of importance to Louisiana’s history. 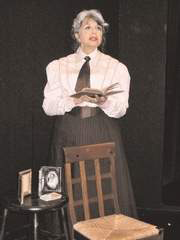 A short film based on Kate Chopin’s “The Storm,”directed by John Berardo and produced by Berardo and Jennifer Mae (Major Diamond Productions) was released in 2009.

The production stars Orion Acaba, Brittany Batson, James Clow, Rane Jameson, Lee Beth Kilgore, and Kiara Obrien. You can see a trailer for the film on the IMDB site. If you can guide us to additional information about this film, would you contact us?

The Spectral Sisters production of a new play by Rosary O’Neill, called “The Awakening of Kate Chopin” was performed at the Hearn Stage Kress Theatre in Alexandria, Louisiana, on August 5 to 8, 2010. 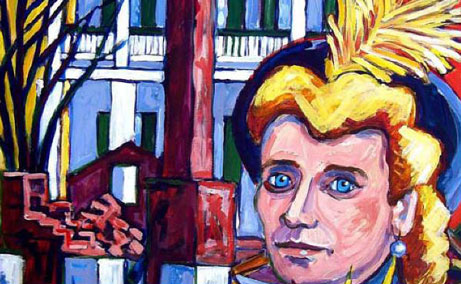 The director of the Hearn Stage Kress Theatre production is Dan Forest. The Chopin painting is by Dr. David Holcombe.

The ETCH Dance Company in Washington, DC, presented a program on July 10, 2010, titled “How Frail the Human Heart.” One part of the program was based on Kate Chopin’s The Awakening. The choreography for the program was by Elisha Clark Halpin.

Dan Shore’s opera An Embarrassing Position, based on Kate Chopin’s one act comedy by that name, had its premiere at the New England Conservatory in Boston, Massachusetts on May 3, 2010. The music is inspired by 19th century Creole composers. Professor Shore is a faculty member of the Department of Music, Xavier University of Louisiana.

A staged, work-in-progress performance of James Stepleton’s opera based on Kate Chopin’s The Awakening was performed at Madewood Plantation House, 4250 Highway 308, Napoleonville (between Thibodaux and Donaldsonville), Louisiana on May 15, 2010.

The title and plot of Kate Chopin’s short story “The Return of Alcibiade”was part of a 1956 television series, The Adventures of Jim Bowie. The Chopin episode first ran in season one as episode 16 on December 21, 1956. The director is Lewis R. Foster. The writers are Monte Barrett and Margaret Fitts, with Chopin getting credit as the source of the story. Set in Louisiana during the 1830s, the series focuses on Bowie and his famous knife in encounters with persons from New Orleans and the rural regions. Our thanks to Tom Bonner and to Bob Skinner (of the Xavier University library) for this information.

You can read questions and answers about Kate Chopin and her work, and you can contact us with your questions.