Regret has been Ripe Figs Productions’ most ambitious venture: a half-hour film, requiring a much more substantial investment than our earlier shorts. For funding, we turned to Seed&Spark, a crowd-funding platform for independent (mostly women) film-makers. Having met their criteria for a fund-raising campaign, we successfully met our goal of $12,000—certainly not enough to fund the whole film, but a great start. We cobbled together the rest of our expenses with volunteers, bartering, personal contributions, and the extraordinary generosity of our friends, families and fans—which is how most independent films are made.

We then set about assembling an outstanding, experienced production crew; next, we met all the requirements for the industry union (the Screen Actors Guild–American Federation of Television and Radio Artists); we put out a call for auditions–and found wonderful actors, including two lively children; and finally, we identified three awesome locations. Our shoot was set for three packed days in late November. We began early Sunday morning at a defunct farmers market in New Orleans. Having re-stocked the bins with veggies and set up a wardrobe room (with coffee and food, of course), we gathered everyone for a very long day.

A few days later, we were out in the countryside at LA Serendipity Vineyards, where we had access to a beautiful house and marvelous outdoor spaces. Another intense day or two of filming followed.

Next was post-production, when our talented editor, Kimaree Long, put the pieces all together, and then: the pandemic. All our plans for a boisterous premiere and a joyous thank-you party in New Orleans, for in-person film festivals around the country–for all the fun stuff: stuffed by COVID. We pressed on, of course, and participated in nearly a dozen on-line film festivals, including the wonderful New Orleans Film Fest (November 2020), where Regret made its local debut on the big (outdoor) screen—and where many of us reconnected for the first time since the quarantine. 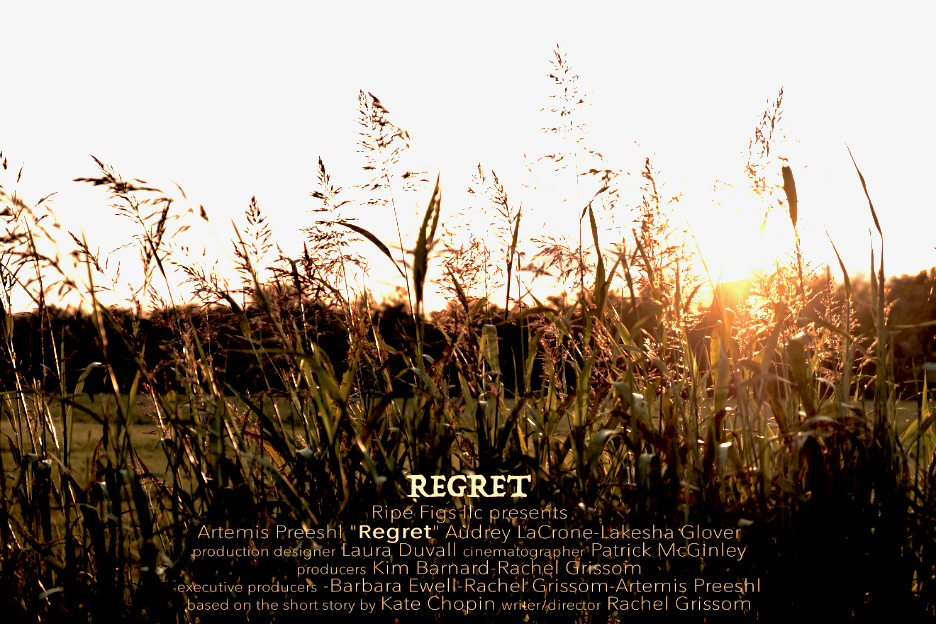 So there have been a few “regrets” about how we’ve been able to showcase Regret, but we are delighted to have found a home here on the Kate Chopin International Society website. Thank you for sharing our delight in and appreciation for Kate Chopin!