“A No-Account Creole” is Kate Chopin’s short story about a young New Orleans businessman in love with a woman who is engaged to marry another man.

Kate Chopin’s “A No-Account Creole” online and in print

You can read online the 1894 printing of the story as it appeared in Bayou Folk.

In print you can find “A No-Account Creole” in The Complete Works of Kate Chopin, in the Penguin Classics edition of Chopin’s Bayou Folk and A Night in Acadie, and in the Library of America Kate Chopin volume, as well as in other paperback and hardcover books. For publication information about these books, see the section “For students and scholars” near the bottom of this page.

“A No-Account Creole” time and place

The story takes place in Louisiana–in New Orleans, in Natchitoches, in Orville, and on the old Santien place, apparently in the 1880s

As we explain in the questions and answers below, some readers pose questions about the passive Euphrasie Manton, the enlightened Wallace Offdean, and Chopin’s repeating characters. Some are troubled by Chopin’s use of regional dialects in her characters’ speech or by her inclusion of words or phrases that are considered offensive today.

Except for a piece she wrote when she was about nineteen, this is Kate Chopin’s first short story. It was written in 1888, when Chopin was thirty-eight, and then rewritten between January 24 and February 24, 1891. It was published in the Century on January 24, 1894, and reprinted that year in Bayou Folk, Chopin’s first published collection of stories. Its earlier titles were “Euphrasie” and “Euphrasie’s Lovers.” 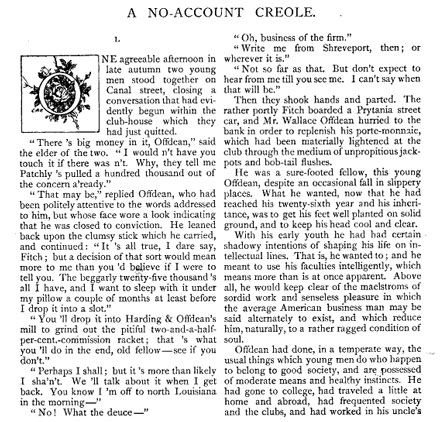 The first page of the story in The Century in 1894

Questions and answers about “A No-Account Creole”

Q: This is an upbeat story. Isn’t that unusual for Kate Chopin? I think of her works as pessimistic.

A: Some of Chopin’s works– The Awakening, “The Story of an Hour,” and “Désirée’s Baby,” among them–have dark closings. But some–At Fault, “Athénaïse,” “The Storm,”and others–are, in ways, hopeful, suggesting that in spite of social, economic, and other pressures, Chopin believes that people have a chance to find happiness.

A: Critics often see Euphrasie that way. She is, however, as critic Helen Taylor points out in the recent Cambridge Companion to Kate Chopin, “a confused and inexperienced woman.” And she’s not entirely without resources. Like Thérèse Lafirme in Chopin’s At Fault (written soon after “A No-Account Creole”), she herself creates the situation that leads to the resolution of the story. Through her letters, she is, albeit unknowingly, responsible for the appearance of Offdean on the plantation and, therefore, in her life.

You might say that early Chopin characters like Euphrasie and Thérèse morph into later characters like Athénaïse, Mrs. Baroda in “A Respectable Woman,” Edna Pontellier in The Awakening, or Calixta in “The Storm.”

Q: Chopin’s description of Wallace Offdean is insightful: “He meant to use his faculties intelligently. . . . Above all, he would keep clear of the maelstroms of sordid work and senseless pleasure in which the average American business man may be said alternately to exist, and which reduce him, naturally, to a rather ragged condition of soul.” Are there other enlightened men like him in Chopin’s fiction?

A: There are some–David Hosmer in At Fault, Charlie’s father in “Charlie,” and Gouvernail in “A Respectable Woman,” “Athénaïse,” and, briefly, The Awakening.

Q: I had no idea that so many Kate Chopin characters appear in more than one story. These Santien brothers are all over the place. How would I find out about such characters? And is it common for writers to use the same characters over and over?

A: You can track Chopin’s characters in Thomas Bonner, Jr., The Kate Chopin Companion New York: Greenwood, 1988. It’s not unusual for other writers to do what Chopin does. William Faulkner, for one, is fond of repeating characters.

Q: I was upset seeing words like “negroes” and “darkies”in this story. Why did Chopin include them?

A: This painful subject requires a sense of historical imagination, historical empathy. Chopin’s language here is a picture of the way people in her time spoke to one another. Words like “darkey” and “Negro,” offensive for us in the twenty-first century, were used familiarly by people of color and white people in Chopin’s Louisiana, usually without intended rancor. Kate Chopin reproduced such language in her characters’ speech, as she reproduced people’s dialectal patterns. For her, as for Mark Twain and others of her generation, recording accurately the way people spoke was an important part of being a good writer.

Louisiana at the time was just a decade or so away from slavery. Chopin does not pretend that the color line is gone, that African Americans enjoy complete freedom and equality, or that everyone lives in racial harmony with everyone else. There are racial tensions in several of her stories.

Chopin was, of course, a nineteenth-century, white, Southern, American woman, but she was also deeply steeped in French culture, being bilingual and bi-cultural from birth. She shares both American and European attitudes toward race, and she always sees more than her characters do.

As we note on other pages of this site, there’s been a good deal written about Chopin and race. If you want to explore the subject you might start by reading articles by Anna Shannon Elfenbein, Helen Taylor, and Elizabeth Ammons in the Norton Critical Edition of The Awakening, and you might look at Bonnie James Shaker’s Coloring Locals. For a defense of Chopin you might start by checking Emily Toth’s Kate Chopin and Bernard Koloski’s Kate Chopin: A Study of the Short Fiction, and on line you could read Elizabeth Fox-Genovese’s comments on the Kate Chopin: A Re-Awakening site. You can find information about these and other publications about Chopin and race at the bottom of the Awakening page and the Short Stories page of this site, as well as on pages devoted to individual stories, like “Désirée’s Baby.”

Q: I love Kate Chopin, but at places in this and other short stories, I really struggle with understanding what her characters are saying. What about the Creole or other dialectal expressions? How do I deal with them?

A: You might try reading the stories aloud–or you might find a native speaker of English who can read them aloud with feeling. Chopin is capturing what her characters sound like as they speak, so it may be helpful to hear the story, rather than read it.

For example, here’s a passage from “A No-Account Creole” in which Pierre Manton is talking to Wallace Offdean. Pierre says that he himself would not be complaining about how run down the place has become:

If you could hear that read aloud, you might understand better. In today’s standard English, Pierre would be saying something like:

“If it would [have] been me myself, I would never grumble. When a chimney breaks, I take one or two [of] the boys; we patch it up [the] best we know how. We keep on mending the fences, first [at] one place [and then at] another. . . .”

Accurate texts of “A No-Account Creole”

Articles and book chapters about “A No-Account Creole”

Taylor, Helen “‘The Perfume of the Past’: Kate Chopin and Post-Colonial New Orleans.” The Cambridge Companion to Kate Chopin. 147-160. Cambridge, England: Cambridge UP, 2008.

Despain, Max and Thomas Bonner, Jr. “Shoulder to Wings: The Provenance of Winged Imagery from Kate Chopin’s Juvenilia Through The Awakening.” Xavier Review 25.2 (2005): 49-64.