“At Chênière Caminada” is Kate Chopin’s short story about Antoine “Tonie” Bocaze, a shy young man who lives on the Chênière Caminada with his mother, Madame Antoine. Readers may recognize him from The Awakening; following Edna’s near-collapse at church, she rests in Madame Antoine’s home, and Robert takes her back to Grand Isle in a boat borrowed from Tonie.

The sketch above is from Cheniere Caminada, or, The wind of death. The story of the storm in Louisiana, a book published in New Orleans in 1893 after one of America’s most destructive hurricanes destroyed the Chênière Caminada (Library of Congress). The sketch shows a fisherman’s hut as it existed before the hurricane struck. Kate Chopin wrote this story a few weeks after the hurricane. See What critics and scholars say about “At Chênière Caminada.”

Kate Chopin’s “At Chênière Caminada” online and in print

You can read “At Chênière Caminada” online, although if you’re citing a passage for research purposes, you should check your citation against one of the accurate texts listed below.

“At Chênière Caminada” time and place

The story is set a few years before The Awakening (in the late 19th century) in the Gulf of Mexico, on Grand Isle, on the Chênière Caminada, and, briefly, in New Orleans.

Readers and scholars often focus on the ideas of love, religion, and death. There are further details in what critics and scholars say below. And you can read about finding themes in Kate Chopin’s stories and novels on the Themes page of this site.

When Kate Chopin’s “At Chênière Caminada” was written and published

What critics and scholars say about “At Chênière Caminada”

“When Chopin wrote the story,” Janet Beer notes, “it was partly as a tribute or an act of memorialisation, a hurricane having destroyed Grand Isle on October 1, 1893. The story, from its quiet beginnings in the church, through the whirlwind of Tonie’s feelings and his growing, destructive fixation, to its resolution in the aftermath of pointless death and devastation, imitates the calm before the storm, the storm and then the unnatural calm which follows. But the stillness of the final scene is not to be trusted; the unpredictability of the storm is an ever-present threat to the calm.” 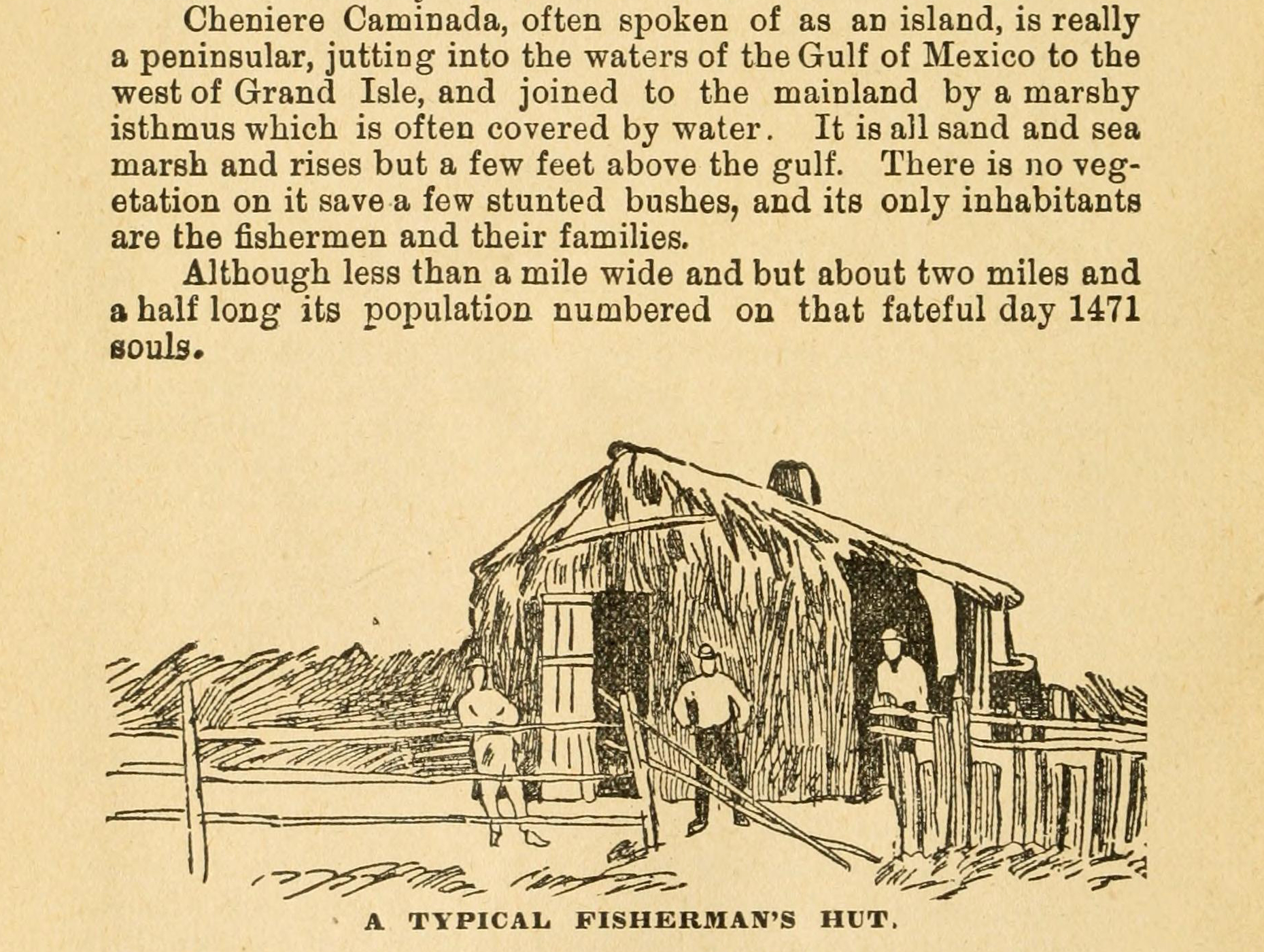 The page image is from Cheniere Caminada, or, The wind of death. The story of the storm in Louisiana, published in New Orleans in 1893 (Library of Congress).

With Claire’s death, Barbara Ewell says, “Tonie can fully indulge his romantic desires for his beloved. Claire’s death thus unites what for Chopin were the twin transcendences of romance and religion. . . . This coupling deepens her presentation of the conflict between body and spirit, art and innocence.”

Drawing on French feminist theory, Michael Worton argues that “in their individual ways, both Tonie and Claire live in the realm of fantasy; they recognize difference in each other but have no sense of the similarity within difference that is essential to true intersubjectivity. What is lacking in both their emotional make-up is the sense of what [Luce] Irigaray calls a ‘relationship-to’, which is built on the desire for the other as other and on the recognition that s/he will always remain irrevocably different.”

This story, Bernard Koloski writes, “is bathed in imagery of the sea, and like The Awakening, it presents the ocean as a place of ‘rest and peace’ but also of death. Tonie Bocaze sees the ocean much as Edna Pontellier sees it. . . . Tonie wants to ‘go far, far out where the sound of no bell could reach him.’ Edna ultimately drowns herself in the sea. Tonie does not, but only, apparently, because circumstances prevent him. . . . Chopin might have described this story as ‘mad,’ the word she uses to characterize some of the [Guy de] Maupassant stories she translated.”

In an article titled “Kate Chopin’s Sleeping Bruties,” Joyce C. Dyer discusses the story as focused on Tonie’s “sexual awakening” which begins with his “new, though disguised, emotions for a woman. . . . marked by sentimentality and juvenile idealization. . . . But Chopin assures us, directly, that Tonie’s new feelings are an issue of sexual need rather than childish infatuation. . . . [Tonie’s] physical appearance and social behavior suggest the presence of primitive forces that must and will find expression. Physically, he seems half-animal, half-man. . . . Like the birds who obey their instinct to fly, Tonie obeys his instinct to possess Claire. . . . . Perhaps because Tonie is a simple, primitive, rather dull and rough man, the guilt that he feels about his passion is less conscious, and the violence that he displays is more extreme and perverse. . . . Tonie’s reaction [to Claire’s death] is not meant to confirm our belief in an afterlife, but rather to convince us of the perversity of Tonie’s jealous passion.”

You can search the titles in our extensive databases of books and articles for more information about this short story—information in English, German, Portuguese, and Spanish.

Accurate texts of “At Chênière Caminada”