This short film was inspired by “Dr. Chevalier’s Lie,” an 1891 story that was eventually published in Vogue, on October 5, 1893.  Barely a page long, Chopin’s story offers a subtle social critique, focusing on a doctor who responds to yet another violent death in an “unsavory quarter” of town. When he arrives at what can only be a brothel, he recognizes the suicide as the young woman from a homestead he once visited in Arkansas. His lie is the letter he writes to her family, concealing her “shame.” But the final lines of the story also suggest the hypocrisy of society, which briefly considers “cutting” him for his care for a “woman of doubtful repute”—but then “did not.” 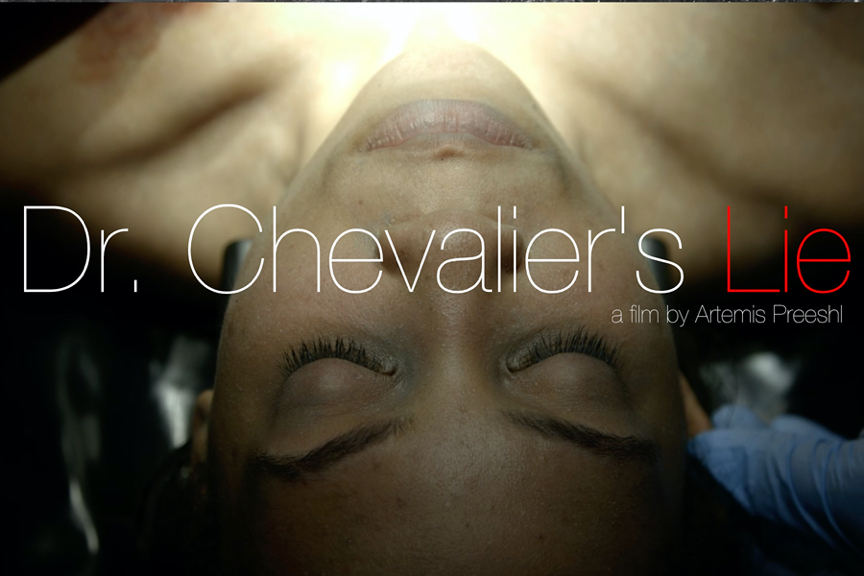 One of the chief attractions of this story for us was in fact its brevity. It was one of Ripe Figs Productions  first projects, and cost was a major concern: we could only finance short, low-budget features. Film-making is notoriously expensive, and many aspiring film-makers, especially those employed in “the business,” depend on bartering and exchanging their skills within the film community. That informal system and the producers’ personal financing made both these short films possible. But “Dr. Chevalier’s Lie” also had a good plot and a serious social critique.

While we were mulling our choices, current events provided another perspective. In July 2016, Alton Sterling was murdered in Baton Rouge by two white policemen, reinforcing on a very local level the awareness that Black Lives Matter. But even more compelling to us was the Say Her Name Campaign, with its focus on women and girls of color, underlining the ways that Black Lives Matter and the media often ignore victims who are not cis-male—not to mention the high rates at which those with disabilities are subject to violence. Screenwriter Rachel Grissom was thus motivated to re-shape Dr. Chevalier’s story into one with more contemporary resonance. The result is less an adaptation of Chopin’s tale than a new story inspired by her social critique. Moreover, our decision to use African-American characters had transformed our vision of Ripe Figs.

Employing very little dialogue (an echo of the original, which has none at all), Dr. Chevalier’s Lie is narrated through inter-cut images of a reality that unfolds for a doctor in the coroner’s office, who must establish the cause of death for the corpse on his gurney. When he sees the body, he recognizes it as that of a bipolar young woman, for whom his office had issued protective orders. His “lie” then becomes the failure of social institutions—like his and that of the police—to protect vulnerable Black women.

Most of the shooting for “Dr. Chevalier’s Lie” took place not far from the New Orleans Ninth Ward home of one of the producers and along the nearby levee of the Mississippi River.

But the scenes in the coroner’s office were shot in a vast warehouse (generously loaned to us) full of movie props.

Seriously: acres of stuff, from which to create the precise details of period offices or bedrooms or hospitals, filled with the appropriate phones or chairs or folders or gurneys or basketballs or ballpoint pens or adding machines or whatever. For those of us unfamiliar with the film industry, it was a revelation! Our concern for accuracy in details also required that we research the exact medical language of an autopsy, which is included on a barely visible whiteboard in the office set.

One of the few speaking parts in this film belonged to Bryan Pedeaux, the owner of the Haydel-Jones House, where Ripe Figs had been filmed a few weeks earlier. An expression of the producers’ gratitude, the role was not, as it turned out, Dr. Pedeaux’s acting debut.