“The Kiss” is Kate Chopin’s short story about a woman scheming to marry a wealthy man.

The engraving is from the December 1884 Christmas issue of Harper’s Magazine. 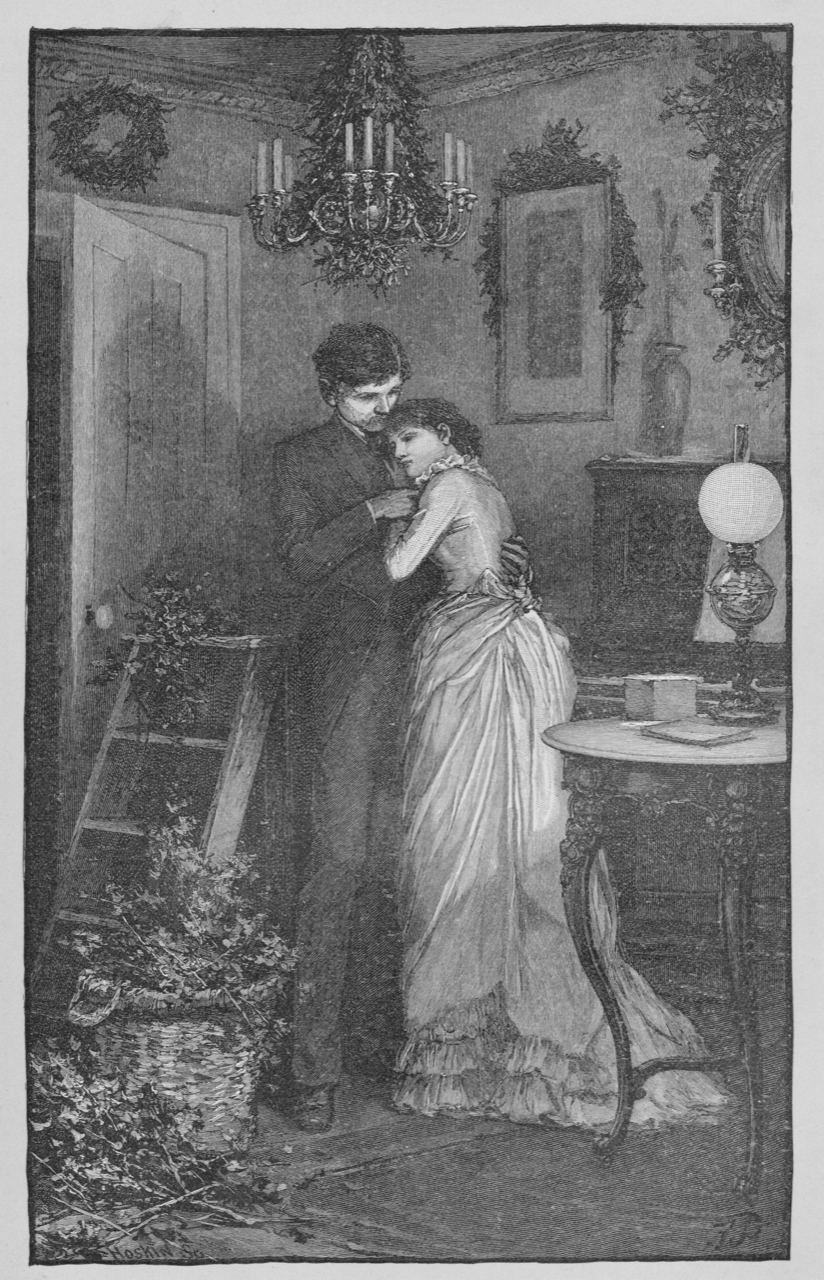 “The Kiss” online and in print

You can read the story online, although if you’re citing a passage for research purposes, you should check your citation against one of the accurate texts listed below.

“The Kiss” time and place

The narrative takes place in the home of Nathalie and her brother, at another unspecified place, and at the location of Brantain and Nathalie’s wedding.

As we explain in the questions and answers below, readers understand the story as focused on women having to choose between passion and money. And, because readers often know today’s Vogue, they are interested in why Chopin submitted so many stories to the magazine and why Vogue accepted them.

When Kate Chopin’s “The Kiss” was written and published

Questions and answers about “The Kiss”

Q: How is “The Kiss” related to “The Story of an Hour” and other stories that Kate Chopin planned to include in A Vocation and a Voice, the short story collection that was never published in her lifetime?

A: Chopin’s biographer Emily Toth writes that “a typical Vocation and a Voice story is surprising, a revelation of secrets and passions that do not quite mesh.” Many stories planned for the book, Toth adds, “have touches of wry humor–and raise tantalizing questions. Sometimes the characters are disillusioned; sometimes they see all too clearly the blindnesses of others and connive around them. Nathalie, in ‘The Kiss,’ for instance, thinks she can flirt with one man even after marrying another–but has to console herself with her new husband ‘and his million.'”

Q: There’s nothing especially subtle about Nathalie’s actions, is there?

A: No. As early as 1970, critic Lewis Leary noted that this story focused on the guile of a woman in attracting a man is presented “with a kind of revelatory freedom not often encountered in print during the 1890s.”

Nathalie is, as Barbara C. Ewell points out, “ruthless,” like Lily Bart in Edith Wharton’s novel The House of Mirth. She understands, Ewell adds, that she cannot “combine independence and sensual satisfaction.” For Ewell, the story is a “curious hybrid” that “underscores a subtle ambivalence about female roles, a duality that continued to shape Chopin’s work.”

Q: I’m surprised that Kate Chopin had so many of her stories, like this one, published in Vogue. What did Vogue readers think of the stories?

A: Heidi Johnsen writes in the recent Kate Chopin in the Twenty-First Century that in the 1890s “the society pages indicate that Vogue readers were concerned with [the issue of women having to choose between passion and money] since the magazine copiously reports not only the engagements and alliances of the wealthy, but also the balls and dinners they give and the vacations they take. The magazine thrived on readers having an interest in those who are in the upper class, and yet Chopin laughs at them when she has Nathalie appear the fool.”

What other scholars say about “The Kiss”

That Nathalie loses, Per Seyersted writes, “is no more than could be expected in the America of 1894. What is new, however, is the author’s amoral, detached attitude toward infidelity, and the wonderful light touch with which she ends such a story: ‘Well, she had Brantain and his million left. A person can’t have everything in this world; and it was a little unreasonable of her to expect it.’ ”

“Clearly Vogue, like Chopin, was interested in representing women as sexual beings,” writes Bonnie James Shaker. “Chopin had . . . learned that [Vogue] was the showcase in which she could count on placing her ‘experimental’ feminist fiction. Between 1892 and 1895 Vogue was either Chopin’s first- or second-choice periodical for publishing much of her fiction, indicating the author was both tracking and targeting the markets in which she would be most successful. In those three years Chopin sent first to Vogue, whose editors accepted the following manuscripts upon first submission: ‘Désirée’s Baby,’ ‘Caline,’ ‘Two Summers and Two Souls,’ ‘Ripe Figs,’ ‘A Lady of Bayou St. John,’ ‘La Belle Zoraïde,’ ‘A Respectable Woman,’ and ‘The Kiss’; and upon having a first-choice periodical reject the manuscript, she sent out to Vogue as her second-choice publisher these manuscripts: ‘A Visit to Avoyelles,’ ‘The Unexpected,’ ‘[Her] Letters,’ and ‘[Doctor] Chevalier’s Lie,’ all of which the periodical also published.”

Accurate texts of “The Kiss”

Articles and book chapters about “The Kiss”

Nolan, Elizabeth. “The Awakening as Literary Innovation: Chopin, Maupassant and the Evolution of Genre.” In The Cambridge Companion to Kate Chopin. Ed. Janet Beer. Cambridge UP, 2008. 118–31.