“Regret” is Kate Chopin’s short story about a fiftyish, unmarried woman who becomes responsible for the care of her neighbor’s four children.

New: A film based on “Regret”

“Regret” online and in print

You can read the story and download it in our accurate, printable, and searchable PDF file, although if you’re citing a passage from this or other Kate Chopin stories for research purposes, it’s a good idea to check your citation against one of these printed texts.

The narrative takes place at the farm of Mamzelle Aurélie–apparently in rural Louisiana.

As we explain in the questions and answers below, readers often focus on the idea of motherhood in the story and how Kate Chopin approaches that subject. Readers are often troubled by Chopin’s use of what today is offensive racial phrasing. And some readers struggle with the dialect spoken by characters in the story.

When Kate Chopin’s “Regret” was written and published

The story was written on September 17, 1894 (two days before Chopin wrote “The Kiss”). It was first published in Century in May, 1895, and included in A Night in Acadie, Chopin’s second published volume of short stories (1897).

Questions and answers about “Regret”

Q: Is Kate Chopin advocating for motherhood in this story?

A: Scholars have been discussing that for a long time. Peggy Skaggs argues that “Regret” develops the idea that “to experience life richly a woman needs a child or children to love and care for.” Mamzelle Aurélie, Skaggs says, “lacks that important part of a woman’s life, the maternal relationship.” And Mary Papke adds that in this story “Chopin depicts the female strength granted to mothers.”

But in the recent Cambridge Companion to Kate Chopin Michael Worton notes that “Adrienne Rich argues in Of Woman Born, [that] we need to differentiate between motherhood as an institution and motherhood as a series of individual experiences and practices. It is with the institutional dimension that Chopin mainly engages in her fiction. However, it is interesting to note that she also gives examples of motherhood as creative and reparative, especially when motherhood is an adopted rather than natural role.”

Q: At one point in this story Kate Chopin writes, “There was a pleasant odor of pinks in the air.” That phrase reminds me of something else Chopin wrote, but I can’t remember what. Do you know what it could be?

A: You may be thinking of the closing sentence of The Awakening: “There was the hum of bees, and the musky odor of pinks filled the air.”

Q: Can you help me understanding the dialect some of Chopin’s characters are speaking in this story?

A: You might try reading those passages aloud–or you might find a native speaker of English who can read them aloud with feeling. Chopin is capturing what her characters sound like as they speak, so it may be helpful to hear the story, rather than read it.

For example, here’s a passage from the beginning of “Regret” in which Odile is speaking to Mamzelle Aurélie:

“It’s no question, Mamzelle Aurélie; you jus’ got to keep those youngsters fo’ me tell I come back. Dieu sait, I would n’ botha you with ’em if it was any otha way to do! Make ’em mine you, Mamzelle Aurélie; don’ spare ’em. Me, there, I’m half crazy between the chil’ren, an’ Léon not home, an’ maybe not even to fine po’ maman alive encore!”

If you could hear that read aloud, you might understand better. In today’s standard American English, the character is saying something like:

“There’s no question, Mamzelle Aurélie; you just have to keep those youngsters for me until I come back. Dieu sait [French: God knows], I wouldn’t bother you with them if there were any other way! Make them mind you [listen to you], Mamzelle Aurélie; don’t spare them. Me, there, I’m half crazy [worried] about the children, and Léon [her husband] not home, and maybe not even to find my poor maman [French; mother] alive encore [French: still]!”

A: This painful subject requires a sense of historical imagination, historical empathy. Chopin’s language here is a picture of the way people in her time spoke to one another. Words like “darkey” and “Negro,” offensive for us in the twenty-first century, were used familiarly by people of color and white people in Chopin’s Louisiana, usually without intended rancor. Kate Chopin reproduced such language in her characters’ speech, as she reproduced people’s dialectal patterns. For her, as for Mark Twain and others of her generation, recording accurately the way people spoke was an important part of being a good writer.

Louisiana at the time was just a decade or so away from slavery. Chopin does not pretend that the color line is gone, that Blacks enjoy complete freedom and equality, or that everyone lives in racial harmony with everyone else. There are racial tensions in several of her stories.

Chopin was, of course, a nineteenth-century, white, Southern woman, but she was also deeply steeped in French culture, being bilingual and bi-cultural from birth. She shares both American and European attitudes toward race, and she always sees more than her characters do.

There’s been a good deal written about Chopin and race. If you want to explore the subject you might start by reading articles by Anna Shannon Elfenbein, Helen Taylor, and Elizabeth Ammons in the Norton Critical Edition of The Awakening, and you might look at Bonnie James Shaker’s Coloring Locals. For a defense of Chopin you might start by checking Emily Toth’s Kate Chopin and Bernard Koloski’s Kate Chopin: A Study of the Short Fiction, and online you could read Elizabeth Fox-Genovese’s comments on the Kate Chopin: A Re-Awakening site. You can find information about these and other publications about Chopin and race at the bottom of the Awakening page and the Short Stories page of this site, as well as on pages devoted to individual stories, like “Désirée’s Baby.”

What other scholars say about “Regret”

Per Seyersted devotes five pages to a discussion of “Regret,” comparing its content and its form to a short story by Guy de Maupassant. And he emphasizes Kate Chopin’s ties to France and Ireland. “Her writing demonstrated an instinctive artistic sense which made use of the best of the Celtic and Gallic traditions. She had learned to apply her in inborn French simplicity and clarity, logic and precision, and the Gallic sense of form, economy of means, and restraint, together with the pathos and humor, the warmth and gaiety of the Irish.”

In her analysis of the story, Barbara Ewell probes “the value of other-centeredness” and “the limits and costs of self-sufficiency.” By the end of “Regret,” Ewell writes, “Aurélie has glimpsed a life that has revealed the insufficiency of her own.”

We are grateful to hear from Professor Lina Ibrahim at Bayan University College, Muscat, Sultanate of Oman, who tells us that she has translated “Regret,” Kate Chopin’s short story, into Arabic. It is published in al-adab.com, an online literary magazine. You can read “Regret” and Lina Ibrahim’s earlier translations, “The Story of an Hour” and “Désirée’s Baby,” on the al-adab.com website.

We asked Professor Ibrahim why she chose to translate these three stories. She replied:

“Each story struck a chord with me. The three women: Désirée, Louise, and Mamzelle Aurélie represent three types of women caught up in situations that other women can relate to until the end of time.

“Désirée faces what so many women face: If there’s a problem, blame it on the woman. Her husband, recognizing the color of his son, is unable to blame anyone but his young beautiful wife. As a man, he thinks of himself as infallible and believes the woman must be responsible for a sin and must be punished (for a crime, it turns out, she did not commit).

“Louise represents miserable women caught in a traditional marriage. They have everything, yet they aren’t happy. The moment of revelation that comes to Louise while grieving the death of her husband brings with it a state of ecstasy. Now she is free, now she understands that her marriage was a prison from which she is finally released. I do believe that many women nowadays find themselves in similar marriages.

“Mamzelle Aurélie is a spinster by choice. She realizes too late that the outcome of her decision to not marry is a life of loneliness. What I relate to in the story is her realization that the children made her aware of what she was missing—not the absence of a male partner, not marriage as an institution, but the joy that comes with having children, connecting with and taking care of them. Here lies the regret of her choice.”

Articles and book chapters about “Regret” 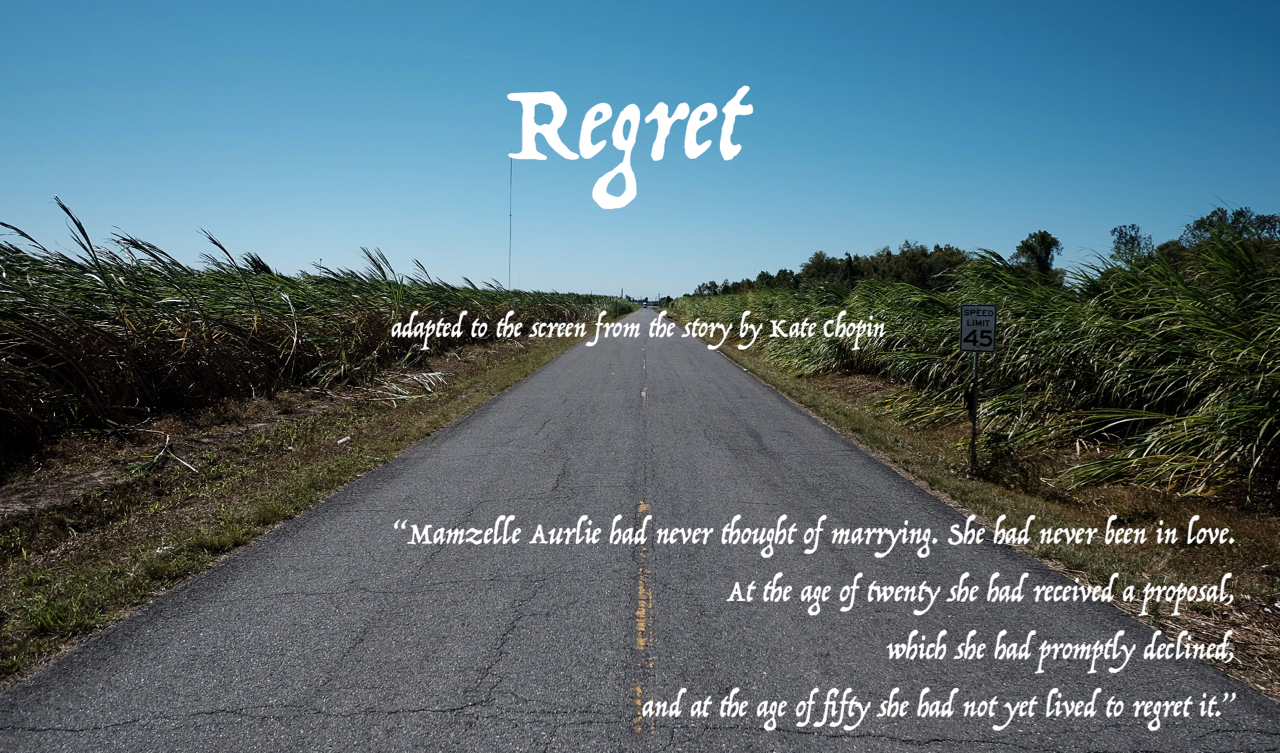 “Regret, a short film based on Kate Chopin’s short story, was selected by the 4th Annual Cane River Film Festival and was among the Top Five featured films. The festival took place in Natchitoches, Louisiana, on March 19 and 20, 2021.

“Regret is also an official selection of the Hollywood Independent Filmmaker Awards and Film Festival. We will announce dates when they are available.
“Note: You can watch Ripe Figs and Doctor Chevalier’s Lie on this website now. But to continue to qualify for other film festivals, we will be able to provide a permanent link for Regret on this website only next summer after we complete our entries for 2020–21. Wish us luck!”